In 2010 WDA sent our staff to Zambia where we have been training leaders for the church. Here are a series of interviews from Zambian leaders following a disciple-building seminar conducted in 2010 by Worldwide Discipleship Association. This video captures the great need for discipleship on the African continent. 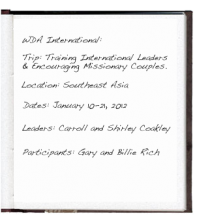 An ancient Buddhist town sits on the crossroads of a major highway near the site of a new university. Thanks to the help of Carroll and Shirley, a new church sits at this important intersection, the only Christian witness in a dark part of the country. Young Pastor “T” and his fledgling congregation are part of a 3% Christian minority in this “closed” country. They represent a giant step toward the salvation of their people. But according to the law, they cannot share the gospel with their neighbors and often experience persecution because of their faith.

Nevertheless, small pockets of gospel witness like this one are springing up all over the country as young believers are discipled and sent out from a small seminary in the capital. Eleven of these young men and women graduated from the bible college seminary on Saturday. Gary Rich, who accompanied the Coakleys, gave the commencement address to the graduates and 300 attendees. On Monday, Carroll and Shirley began training several of the students for their month-long deployment to Buddhist villages throughout the country. Shirley and Billie conducted 2 days of training for the women of the church.

On their way home, the Coakleys and the Richs visited two missionary couples in Singapore for a refreshing time of fellowship and prayer. They write, “We felt God’s anointing on us in everything with which we were involved… The Riches could hardly believe all of the success of T’s ministry and how it has been used by God… WDA has been a great part of it through the power of God’s Spirit.”

WDA labors alongside these brothers and sisters in offering training, resources, and prayer. It is our heart’s earnest desire that through this crucial equipping ministry, this closed country might open its doors to the gospel of Jesus Christ. There’s a lot to be done,” says Carroll, “but few sowers. There are not a lot of people who want to go and have the commitment.”

Pray for the spreading of the gospel and the ongoing work of helping faithful brothers and sisters around the world grow to maturity. Consider making the Coakleys and especially the people in “closed” areas of the world a part of your regular prayers! Work such as this doesn’t happen without the support and prayers of God’s people.

If this report has been an encouragement to you consider sharing it with others using the social sharing buttons below!

Merida is an ancient Mayan town gone cosmopolitan hub on Mexico’s Yucatan Peninsula. Everette Albrecht has been coming here for 9 years to conduct WDA discipleship training seminars at San Pablo Seminary. He returned in January with friend and multi-media guru, Don Lambert for several days of teaching. Alongside friend and translator, Pastor Magdel, Everette presented Christ’s progressive disciple-building model to 7 students during the days and 15 community members who joined them for evening sessions at Antigua Presbyterian Church. Everette also conducted a 2-day discipleship seminar in the nearby town of Seye over the weekend.

Everette explains that the gospel message of the first Presbyterian missionaries was embraced widely. “There are so many interconnections among the Mayan people that once the gospel was preached, it literally swept through the people.” But to date, there is a leadership vacuum in Merida’s churches. “So what we’re emphasizing,” says Everette, “is such a felt need in that part of the world.” When he talks about discipleship among students at San Pablo seminary, their eyes light up.  The most common response is, “Tell us more. How do you do this?”

The partnership between the community of Merida and WDA has expanded to Everette’s home church (Covenant Church of West Lafayette, IN) which now does service projects there and offers financial support to 5 students of San Pablo Seminary. One of these students is Jose Louis Palanko who is spending a year living with the Albrecht’s, learning English and preparing to enroll at San Pablo Seminary in the fall. While in Indiana, Jose Louis is learning about the process of emotional healing through a WDA “Restoring Your Heart” group. He is also involved in leadership for the men’s ministry at Covenant Church. He represents high hopes for the future of the Presbyterian Church in Mexico.

What Can You do?

As WDA continues to partner with San Pablo Seminary, would you pray for men like Pastor Magdel and Jose Louis Palanko to continue strong in the faith?

Pray for the churches in Merida to raise up mature leaders who will take on the call of disciple-building and provide faithful leadership for the next generation.

Finally, would you prayerfully consider making a tax-deductible donation to the international training ministry of WDA?

Your gift will ensure that pastors and disciple-builders in Merida and throughout the world continue to receive support and training for fulfilling Christ’s Great Commission (Matt. 28:19-20).

Discipleship is more caught than taught someone once said. We at WDA believe that for people to grow to maturity in Christ this begins with relationships. Life on Life, day by day, moment by moment relationships. When Jesus begins his ministry he starts by asking one of his first followers to “Come and See.” This basic invitation for them to come along and learn is the root of great discipleship. No one ever can see all that you invest in a friendship. You cannot see all the training that your children get from you by only looking at what you may have covered over the dinner table. Even the most involved home-schooling parent cannot see the full measure of what living with you child teaches them.

The person who says to another come and see doesn’t just say come learn from the things I do correctly or listen to be teach a bible study, they say come learn how I follow Christ. A disciple who is able to connect with a discipler, has to commit time. There is a partnership and a familial relationship that develops. The beauty of this type of teaching is that I share my failures and better yet reveal and demonstrate my failures to someone I disciple. They get to see me running to the cross, repenting and trusting in the truth of the gospel. They get to see me struggle to obey and strive to understand difficulty truth.

Life on Life discipleship is not something that happens in a classroom. Consider who the people are who have poured into your life. A teacher, a coach, a neighbor, a Dad or a Mom. These people didn’t have an impact on you because you listen to a lecture and answered all the questions. You grew because God used them in your life. You got to learn as you were able to live around them.

Discipleship is Life on Life. We at WDA strive to give you the tools to know how to learn to disciple this way. We have staff who are trained in this type of ministry.  See if there is a WDA staff person in your area who may be able to introduce you to WDA and more importantly to Life on Life Discipleship like Jesus did.

What was most helpful to you at the WDA 28/20 Conference? Why?

“Open and honest comments and answers as well as the willingness of Jack (Larson) and Bob (Dukes) to say “I don’t know – [I don’t] have all the answers.”

“The content and plan are the most helpful – the content tells what we need to do, and the plan tells how to start what we should already be doing. This gives motivation!”

“The emphasis on applying it in your own ministry situation – we were apprehensive about coming and just being overwhelmed with info and not knowing how to make it practical for us.”

“The Saturday AM session – particularly the “2 rails” illustration. Secondly, the Friday AM session on getting beyond emotional issues.”