If man is created in the image of God, why does he struggle with so many problems? Why do people have so much trouble getting along? Why are there so many wars? Why are people so selfish? These and many questions like them betray the fact that there is something wrong with man. Though he started out well, something happened along the way that upset the apple cart, and he has never fully recovered.

In the first book of the Bible, Genesis, there is a record of Adam and Eve in the Garden of Eden, and we learn what happened to man that has caused so many problems. We can only imagine that the garden was a beautiful, lush place filled with all kinds of vegetation and animals. The weather was perfect, and there was plenty to eat. There were also opportunities to explore and learn. Everyone got along well, and God was at their “beck and call”.

God had given them only one restriction. They could eat from any tree in the garden except from the tree in the middle of the garden: the tree of the knowledge of good and evil (Genesis 2:8-9,15-17). God told Adam that if he were to eat from that tree he would die.

In Genesis 3 another character enters the garden—Satan in the form of a talking serpent. His purpose was to try to persuade Adam and Eve to eat the fruit from the forbidden tree. In a very clever way the serpent called God’s character into question and caused Eve to doubt God’s goodness (Genesis 3:1-6). He convinced Eve to try the fruit, and she, in turn, convinced Adam to join her, and nothing has been the same since.

What happened as a result of Adam and Eve’s sin is often called the Fall of man. He became less than he was created to be. Before the Fall, man desired to know and follow God. Afterward, man’s attitudes were hostile toward God (Romans 8:5-8). This inclination against God is what the Bible calls a sin nature (Galatians 5:19-21). Man’s hostility or his indifference toward God leads to many sinful behaviors. As a result of the Fall, man is thoroughly sinful and unable to make his way back to God. He is lost and can’t save himself. This does not mean that he is as bad as he can possibly be.

God told Adam and Eve that if they ate the fruit from the tree of the knowledge of good and evil they would surely die. They did eat, and although they did not die immediately, they did begin to die. Their physical death had become certain. The only question was how long they would live before they died. And they were not the only ones who would die. Death spread to all men because all men sinned (Romans 5:12). So through the sin of one man, sin spread to all men, and all men died.

Separation from God is spiritual death. Man’s relationship with God died with the Fall, and he was separated from God, the source of all life. Thus, man would not only die physically but also spiritually, leaving him to wander around aimlessly looking for something that was missing—looking for life from God.

Many people realize there is something missing in their life and are searching for something more or better. But they don’t know what it is. It is God. Even when we do have a relationship with God and life is better, there is still a sense that something is missing. We will never fully experience life and fulfillment until we go to be with Jesus and experience life beyond our imagination. We look forward to that day with a deep yearning. But it begins with finding life now through a relationship with the living God.

The Fall changed man’s relationships in many ways. It changed his relationship with himself, other people and even with nature. We are told that before the Fall the man and the woman were naked but not ashamed (Genesis 2:25). But immediately after the Fall, they realized they were naked and were ashamed (Genesis 3:7). Shame altered man’s relationship with himself. All of us now struggle, to some degree, with self-worth because of our sin. One of our greatest needs is to regain a sense of our value and worth.

Sin also damaged man’s relationship with other people. Immediately after the Fall, Adam and Eve’s relationship with one another took a turn for the worse. Adam blamed Eve and God for his sin, and Eve blamed Satan (Genesis 3:8-13). There was fear, shame and blame but no remorse or repentance. Relationships began to suffer. It was not long after the Fall that Cain killed Abel (Genesis 4:8). And not long after that, God was sorry He had even created man. He sent a flood to destroy man but preserved the human race because of one righteous man and his family, Noah (Genesis 6:5-8).

Even man’s relationship with nature was affected by the Fall. The world itself was altered. Originally the earth produced all kinds of fruit. After the Fall, fruit production was more difficult. God cursed the ground and caused thorns and thistles to grow to crowd out the crops man needed to live. Man would have to work hard to survive in this new world (Genesis 3:17-19). All of creation, we are told in Scripture, was subjected to frustration through the Fall and awaits its liberation from decay that will occur when God’s children are liberated (Romans 8:19-21).

The Fall of man was like a tragic train wreck. It left mankind and this world battered and in twisted disarray. A train wreck can be cleaned up and cleared away. Man’s condition and the condition of this world will not be fixed completely until Christ returns to make everything right. When a person comes into a personal relationship with Christ, Christ begins the process of restoration that will continue throughout the person’s whole life. But the restoration will not be completed in this lifetime, and so we look forward to Christ’s return and the completion of the good work He has begun in us.

The Fall of man and its terrible consequences are not a pretty story. But it does help us make some sense out of this world and explains why there is so much pain and suffering. It also helps us to develop realistic expectations in an imperfect world.

• As you think about your life over the past few weeks, how has sin hindered your relationship with God?

Get this Pocket Principle in Understanding People, part of Cornerstone  from the WDA Store 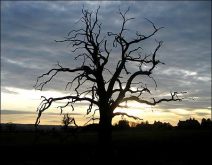 I remember pretty much every detail of that day. I was driving with John, her 13 year old son, from Stone Mountain to Augusta so we could see her one last time before she died. John had been spending the weekend with me to try to get away from the sadness in his home. We never made that last visit. Halfway to Augusta, I got the call from her husband, Martin, telling me that Lizzie was gone. He did not want me to tell John. He wanted to tell all three children himself when they were together. Later that day I sat in their living room while he told John and John’s younger sisters, Emily 11 and Kathryn 5 that their mom was gone. It was surreal. It didn’t seem like it was really happening. Even though we had known for five months that she was dying, it still didn’t seem true. She was 42 and dead from breast cancer.

Yesterday was August 18, 2012. Fourteen years since my sister died. I didn’t notice the date until a friend of mine called to tell me that her younger brother had been found dead that morning. August 18. Suddenly all the sadness came rushing back. I felt such a weight for my friend as I remembered the early grief over my sister. The ache in my chest. The pain I felt for her children and her husband. The pain I felt for my parents. The endless crying until I just couldn’t breathe anymore. Nothing can compare to the pain of losing someone you love too soon.

I haven’t cried for my sister in a while. I am to the point of grief now where it is just a dull ache and random sadness over events and circumstances. But today, the pain was back, unexpected and unwanted. Hearing about my friend’s brother triggered all those old feelings. So I went for a grief walk and cried. I miss Lizzie. She was sarcastic and funny. She stood up for herself and for those she loved. She could be intimidating because she was so outspoken and no one on earth could annoy me more than she could. When we were growing up she was a pesky little brat but she and I became good friends in adulthood. I miss her every day, but the grief really hit me today.

As I walked and cried and missed Lizzie, I thought about some of the things I have learned from the people I counsel with. I call them my chickies because client sounds too clinical. My chickies think they are coming to me to be healed but it works both ways. I heal as much as they do. One of my chickies told me that as she gets older it seems like grief sticks to her more. I love this phrase because it fits my reality. I, too, have found that grief sticks to me more and knowing I am not alone in this is oddly comforting. Another of my chickies told me the profound way that God has given him hope through the verse “Joy comes in the morning.” (Psalm 30:5)  Frequently, when he is at his lowest, God reminds him of the joy to come and I thought of that today as I walked. Both for me, with my old grief, and my friend, with her new grief. And again I felt the comfort of being connected to someone else in sadness.

God gives us to each other to help the healing. We all hurt. We all have sadness and grief. We all lose people we love.

August 18 will always be a sad day for me. There are some pains that just will never be totally healed. And yet, I am comforted by the people God has put around me to share that grief, even when they don’t know they are giving me comfort.