It was 1965 and Charles Schultz continued to create the timeless comic strip Peanuts.  The producers at CBS took a chance on creating an animated Christmas special.  As the story boards were being created and the concept was being set in motion, there were conversations happening between the creator and the people from CBS.  What kind of music?  We find out that Charles Schultz wasn’t sure about the jazz music.  Which has not only continued to be part of the program but it has become part of many people’s Christmas music library.

Not only was their discussion over the music, there were some who were not sure about the ending.  Do we really think that people will want the Christmas story quoted from the Bible?  Well as it ends up Schultz gave in on the Jazz music and CBS gave in on the passage from the gospel of Luke.

The story line is classic. Charlie Brown, conflicted again, bring his concerns to Lucy who has a Psychiatric “lemonade” stand. He continues to ask Linus and even after taking on the role of director of  the Christmas program filled with dancing children, Snoopy making animal noises and Lucy wanting to be the Christmas queen, he cries out, “Isn’t there anyone who knows what Christmas is all about?”

It seems that the same challenges face us today. “Isn’t There Anyone Who Knows What Christmas is All About?”

What do you find yourself thinking during this Christmas season? Where are you spending most of your time?  Are you just as discouraged as Charlie Brown? Have you found yourself looking at websites for Christmas cruises or short weekends away in the mountains?  Maybe instead you have found yourself bearing all the expectations of your family, parents or church?

It is so hard to dim the lights, drop our blue security blanket on the floor and begin to tell our hearts, “what Christmas is all about.”

About that time Caesar Augustus ordered a census to be taken throughout the Empire. This was the first census when Quirinius was governor of Syria. Everyone had to travel to his own ancestral hometown to be accounted for. So Joseph went from the Galilean town of Nazareth up to Bethlehem in Judah, David’s town, for the census. As a descendant of David, he had to go there. He went with Mary, his fiancée, who was pregnant.

While they were there, the time came for her to give birth. She gave birth to a son, her firstborn. She wrapped him in a blanket and laid him in a manger, because there was no room in the hostel.

There were sheepherders camping in the neighborhood. They had set night watches over their sheep. Suddenly, God’s angel stood among them and God’s glory blazed around them. They were terrified. The angel said, “Don’t be afraid. I’m here to announce a great and joyful event that is meant for everybody, worldwide: A Savior has just been born in David’s town, a Savior who is Messiah and Master. This is what you’re to look for: a baby wrapped in a blanket and lying in a manger.”

At once the angel was joined by a huge angelic choir singing God’s praises:

Glory to God in the heavenly heights,
Peace to all men and women on earth who please him.

As the angel choir withdrew into heaven, the sheepherders talked it over. “Let’s get over to Bethlehem as fast as we can and see for ourselves what God has revealed to us.” They left, running, and found Mary and Joseph, and the baby lying in the manger. Seeing was believing. They told everyone they met what the angels had said about this child. All who heard the sheepherders were impressed.

Mary kept all these things to herself, holding them dear, deep within herself. The sheepherders returned and let loose, glorifying and praising God for everything they had heard and seen. It turned out exactly the way they’d been told!

That’s what Christmas is all about Charlie Brown.  Take this to heart!  Stop.  Listen.  Consider.

Have you been in that auditorium? Have you been at the end of yourself?  The end of the program points to where you might need to begin.

The children who have made fun of Charlie Brown’s little tree, find that all it needed was a little love!  The tree that was once made fun of becomes the object of their attention.

Jesus is that little tree!  He was the object of scorn. He took on human flesh, became a man so that he could take our place on a Cross. Joseph was told, “Call Him Jesus for He will save His people from their sins.”

The children, circle around the tree and begin to sing at the end of the program. 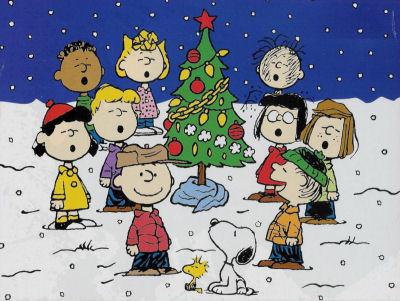 This is what Christmas is all about Charlie Brown.

The Christmas I was six we lived in a small white frame house on Washington Road in Augusta, Ga.

It was a scary time of life…my family had just moved from Dallas, Texas to this strange southern city.

Along with that, I started first grade later than all the other kids so I didn’t learn how to correctly pass scissors and I had a new baby sister who got too much of my parent’s attention.

I also had weird nightmares about a tiger getting its middle chewed out.

Washington Road was being widened so there was a ditch the size of the grand canyon in front of our house and we were warned daily about slipping into it and never being able to get out. My brother and I must have been angry a lot, because my mother hung pillows from a tree in the back yard and told us to hit them instead of each other when we got mad.

Our house had a furnace in the hallway and the heat never seemed to get to my bedroom. In the mornings, my brother and I would grab our clothes and run to the heater where it was warm, to get dressed.  Our house was infested with mice, so each day there was a fresh supply of flattened mice in little mousetraps. I lost my first tooth and when it fell out of my mouth it completely disappeared so the tooth fairy couldn’t come.

Yes, it was a scary time.

That is probably why I remember Christmas Eve so well the year I was six years old.

I remember the anticipation of Santa Claus coming and all that it meant; magic, new toys, possibly candy, something special just for me. I lay in bed on Christmas Eve trying to go to sleep but I was just too excited. I kept getting up and getting sent back to bed by my parents. I was so excited I felt like I would explode.

Then I heard it!  The sound of Santa’s sleigh hitting the roof. It was unmistakeable! What should I do? I remember lying in bed paralyzed with excitement and fear at the same time. Suddenly Santa Claus himself appeared in my bedroom door, peeking in to check on me.

Then it was morning. There, under the Christmas Tree was a magical array of toys and gifts that Santa had left. Special gifts for each of us, for me!

When I think back on the year I was six, this is the one event I remember with awe and wonder. In a very scary, very new, very unsettled world, I found hope and wonder in a gift…for me.

The feelings I had at six and the experiences of my world then seem to me a perfect picture of the true Christmas Story. A dark and confusing world, into which God sent His Son, a special gift, just for me…just for you.

My hope for you this Christmas is that you will experience the excitement, fear, awe and wonder of the absolute mystery of God’s gift to you in the person of His Son Jesus Christ.  That you will feel and know His love for you.  That you will be comforted in this dark and confusing world by God’s Son.

Just another thing on the list! I could not help but think this as I read the gentle promptings from my communication manager to prepare a yuletide blog.

For some reason I just knew as I listened to Christmas Carols while buying my Thanksgiving turkey that this year was going to end in a fury. Adding one more writing chore was just what I needed!

About that same time my daily reminder went off to let me know my friend Randy Gravitt’s blog for the day had been delivered. As I read through it I was drawn to his reminder:

“On this “First Day of Christmas,” take some time and identify what those few things are that need your attention and then seek to eliminate the distractions.”

These words both comforted and encouraged me. Randy, you know, you are right. Learning to not get “tangled up” in Christmas is just what I want this year.

More time with the kids and less time in the stores. Time away from work, not to plan more work for next year, but rather to count my blessings for this past year. I want to laugh and play and tell my brother that I can still throw a football further than he can.

So this little writing request is my first declaration of my decision to follow Randy’s advice. Rather that try to write something new and pithy I just want to say. “Yeah, what Randy said!” Check out Randy’s complete blog on the 12 days of Christmas at: http://i2ileadership.org/?p=2088

I am thankful that the Lord has blessed him to write what I feel in my heart. My hope for you, and for us all, this Christmas season is to understand that the Love of the Savior is all we need. More time with Him and His most wonderful creation, each other, is what Christmas is really all about.

And there were shepherds living out in the fields nearby, keeping watch over their flocks at night.  An angel of the Lord appeared to them, and the glory of the Lord shone around them, and they were terrified.  But the angel said to them, “Do not be afraid. I bring you good news that will cause great joy for all the people.  Today in the town of David a Savior has been born to you; he is the Messiah, the Lord.

Editors Note: if you want to hear the story read by Linus click below!