Mike Rasmussen’s central task as WDA’s Resident Theologian is to write a textbook under the working title: A Biblical Theology of Spiritual Formation.  The plan is for this textbook to be translated into several different languages, an essential ingredient in WDA’s vision to assist churches all around the globe to make 1,000,000 discipleship impacts for our Lord Jesus by the year 2022.

Why is this textbook important?  In short, this project is important because WDA writes curriculum for the Church, and we train church members to relationally use that curriculum to help others grow toward Christ-like maturity.  If you go to the bookstore on this website, you’ll see that WDA has written a whole system of curriculum to help the church make and equip disciples.  Much of this curriculum has been translated into several different languages because most of WDA’s work is international.  WDA trains church members to invest in the lives of others using the curriculum as a proven process for authentic, relational, life-on-life discipleship.  While you’re at the bookstore, notice that much of the curriculum is broken down into phases (Phase I, Phase II, Phase III and so on) to help people at their different stages of growth as Christ-followers. 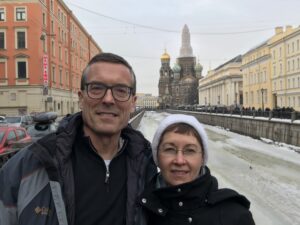 Mike and his wife Renatta during their recent trip to Russia, where Mike taught “Biblical Theology of the Old Testament” at HopeRussia Theological Seminary in St. Petersburg to a group of pastors who had flown in from churches scattered across eleven different time zones ranging from Latvia in the west to Russia’s eastern coast near the Sea of Okhotsk.

In the three years that Jesus spent with his disciples, he had a strategic plan to bring his disciples along, to help them grow from unsure followers—through various phases—into the movement leaders that they would eventually become.  Jesus used his loving relationship with his disciples to lead them progressively through the growth phases toward Christ-like maturity.  The clearest example is that Jesus said, “Follow me!” before he said “Go into all the world!”  If he had switched the order of these two commands, the disciples would have wound up quite confused!  But when we look at the Church today worldwide, most leaders are so busy with the week-to-week life of the church (writing and preaching sermons, running programs and solving problems) that they simply do not have the time to fully develop a biblically-based plan for training leaders who will then train other leaders.   Although their church members participate in many different programs (Sunday School classes, small group Bible studies, seminars, conferences), in most cases there is no organized process or plan to help people reach the goal of Christ-centered missional maturity.  WDA believes that to be relationally systematic (like Jesus was with his disciples) is the best approach.  We use the word progressive to describe this.  And we provide curriculum and training to help the church carry out progressive discipleship all around the world.

We believe that the textbook that Mike will be writing—A Biblical Theology of Spiritual Formation—is an essential part of this effort, because the plan is to translate it into several different languages so it can become part of the core curriculum in Bible colleges and seminaries in Latin America, Africa, Russia and the Far East, as well as here in the US.  The textbook will help the professors of these institutions all around the world to make progressive disciple-building a part of their schools’ DNA.  So the textbook that Mike will write will help to train the next generation of leaders in foundational biblical principles for igniting planned, proven disciple-building movements throughout the world.  Mike’s goal, as endorsed by WDA, is to raise $150,000 over a three-year period which will allow him to spend the majority of his time working on this important project.

In addition to being WDA’s Resident Theologian, Mike is Professor of Biblical Studies for Hope Russia Seminary in St. Petersburg, Russia, where he teaches two 2-week intensive courses per year.  Mike is a graduate of Reformed Theological Seminary (MDiv, 1987) and of the University of Aberdeen, Scotland (PhD in Old Testament, 2011).  Mike has been an ordained Presbyterian minister since 1987.  In addition to spending eight years teaching Old Testament and Practical Theology at the Dallas Texas campus of Westminster Theological Seminary, Mike has planted two churches, as well as having served on the pastoral staff of churches both large and small.  Mike and his wife, Renatta, have two adult sons, a daughter-in-law and a granddaughter.