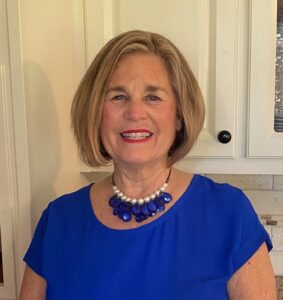 Linda Dukes met Christ in 1972 when she was 23 at a Christian music festival, and was called into ministry a year later while she was teaching high school English to migrant workers’ children in Haines City, FL.

Linda is intimately involved with the Restoring Your Heart ministry at WDA as a group leader, trainer, group coordinator and consultant.  Occasionally, she is involved with writing and editing WDA Discipleship and Restoring Your Heart materials.  She is also a special assistant to the president, and co-leads a weekly international prayer meeting with him.  Previously, she served as Senior Staff Woman at the University of Tennessee, which she helped launch in her first year on WDA staff. In 1980, the Dukes moved to the Atlanta area when her husband, Bob, became the National Campus Director.

In 1985, their fourth child, Elena Victoria, was born with Down Syndrome, a hole in her heart and a blocked intestine.  At 9 months old, she was diagnosed with a rare form of leukemia, and went through intensive chemotherapy.  She had open heart surgery at 2 years old and developed respiratory disease, esophageal reflux at 3, and chronic sinus infections for many years. .  Linda’s focus was on the home front of necessity; but she continued to involved whenever possible.

In 1999, Linda went back to work at the WDA central office. She helped write guided discussions for new believers called Getting Started and is a Certified Leader for Restoring Your Heart, and became the Champion/Administrator at WDA’s Restoring Your Heart Training Center in Fayetteville, GA. She also advocates for people with disabilities, and has been the President of organizations for parents of children with ADHD and various disabilities. She currently serves on a state-wide committee on Participant Direction of Medicaid Waivers for people with disabilities.

Linda is a graduate of the University of Florida in Secondary Education with a major in English, and minors in Speech and Journalism. She loves to spend time with Jesus, read, dance, sing, travel, tell people about the Lord, disciple women, speak, teach and spend time with her family. She has 5 children, 2 daughters-in-law, 1 son-in-law, and 7 beautiful grandchildren.