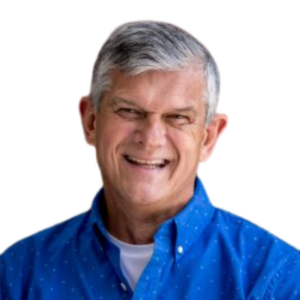 In addition to his work with WDA, he was President of Youth Ministries, Inc., and helped launch several community-wide youth organizations including: “The Barn” in Knoxville, TN, “The Gathering Place” in St. Simons Island, GA, and “Encounter Now” in Fayetteville, GA.

Bob graduated from Columbia University in New York City, and attended Reformed Theological Seminary. He was awarded several honorary athletic and academic honors including Columbia’s prestigious “1917 Football Cup”. He was a finalist for The Rhodes Scholarship, selected as an “Outstanding Young Man of the Year” by The International Jaycees, and inducted into The East Tennessee Football Hall of Fame.

Bob is often enlisted by churches, schools and international companies and organizations as a conference and keynote speaker. He has traveled extensively speaking on issues related to discipleship and evangelism. Bob and his wife Linda have been active in student, discipleship, marriage and family ministry since 1972. Bob is currently a discipleship consultant at New Hope Baptist Church in Fayetteville, GA.  In his spare time, he loves to work in his garden. The Dukes reside in Fayetteville, GA and have five children and seven grandchildren.