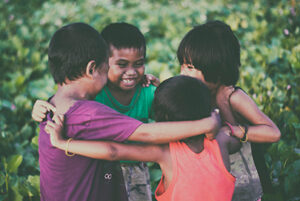 I was very blessed when recently three people I know went out of their way to tell me how much being in Restoring Your Heart groups had helped them.  I also found it very interesting to hear how God had used the same material to help each of them in different ways.

The first one was a Filipino pastor I know from my trips to Quezon City in his country.  He had been through a rough time when my team met him on our first trip to The Philippines.  He felt like he had failed God and his ministry because of some circumstances that are not as important as the fact that he had repented of them and come back to God.  But he still felt guilty and was doing secular work.  After talking to some of our men and completing a Processing Pain group he says he is feeling much better about himself. He also feels that his relationship with God has been restored and he has returned to the ministry. He is very excited about being in an Understanding Emotions group now with the same group of men whom he got to know so well the first time.  He also wants to be trained to be a Restoring Your Heart group leader because he wants to help others work through the same material that helped him so much.

The second person is a lovely American woman who became a Christian as an adult.  She tells me that she was very happy to be a Christian but found it difficult to settle into a church and to grow spiritually. Her life changed very little because of her conversion experience.  When she heard about Restoring Your Heart groups, she knew she wanted to be in one.  She completed a Processing Pain group and went on to do Understanding Emotions and Conquering Shame groups.  She found that some of the emotionally based problems she had experienced in the past had been preventing her from growing spiritually.  After dealing with many of these problems in RYH, she found a good church that she loves and started attending a Bible Study there also.  She reads her Bible regularly and understands it on a new level.  She now prays regularly and has many Christian friends. Most importantly she now feels close to God.

The last person who shared with me is a very youthful middle-aged American woman in full time Christian work.  Her relationship with God was not her problem.  Because of her past she found it very difficult to trust anyone except God, her husband and her children.  She had become a Christian years ago and wanted to have Christian women friends but found it very difficult. When she heard about Restoring Your Heart groups she also knew that she wanted to be in one.  While she was participating in the Processing Pain group she began to discover what had happened to her in her past that made it very hard to trust people.  She has worked through the restoration process and has experienced a great deal of healing in the areas of trusting people and self-esteem.  She also developed some wonderful friendships with the women in her group and found she could trust them.  That Processing Pain group went so well that the women decided to do an Understanding Emotions group next and then went on to do a Conquering Shame group together also. This group now has regular reunions and feels like God has knit their hearts together as sisters in the Lord. My friend is so happy to have a place were she “belongs” with other women.

My conclusion from these three stories and the many similar ones I have heard in the past is that Restoring Your Heart groups really are discipleship groups.  They help us to grow spiritually, to draw closer to God and other people and to be more effective in our ministries.