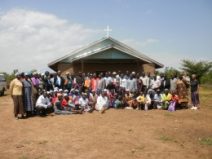 In 2005, a land dispute erupted in the Mount Elgon region of Kenya’s Rift Valley. The corrupt local militia, “Sabaot Land Defense Force” began raiding villages, extorting bogus “taxes”, killing civilians, and currying favor with local politicians. Over the next three years, the SLDF was implicated in the death of at least 600, and the displacement of over 66,000 people. In 2008, Kenyan security forces launched a major military operation against the SLDF, killing its leader and effectively halting its progress.

WDA trainee Harrison Ngota was living in the region at the time. He reports, “In December of that year, it was registered that more than 600 women had lost their husbands to the conflict. We listened to stories of torture and rape from the pastors and leaders present.”

Last month, WDA trainers Mary McKeever, Willie Ruth Johnson and Kathy Heid conducted a discipleship-training seminar for over 50 pastors and leaders in that area. Working off Mary’s foundational teachings on discipleship and a session on forgiveness based on the book As We Forgive: Stories of Reconciliation from Rwanda, Willie Ruth and Kathy each taught a session on forgiveness as well. Harrison Ngota writes, “This was the most interesting part, drawing so much attention, [leading to] brain-storming sessions. It is very difficult to render forgiveness. SLDF intimidated the population, raped and stole property at will, collected “taxes”, and administered their version of justice. Hundreds of people have been burned out of their homes.”

Mr. Ngota goes on to say, “There is a need to ‘go the extra mile’ and equip pastors and leaders on the ground. Most spiritual leaders have a strong, sincere desire to shepherd and guide disciples to maturity. But unfortunately, few leaders have been equipped to accomplish the task of ‘presenting people mature in Christ.’”

WDA remains committed to providing training and resources to Christian leaders in Kenya. Our prayers are with the pastors and leaders of Mt. Elgon as they navigate the fallout of recent violence in their region.