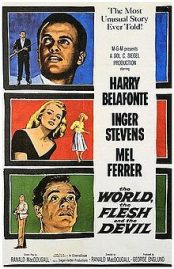 The story is told of a reporter who was interviewing an old man on his 100th birthday. “What are you most proud of?” he asked. “Well,” said the man, “I don’t have an enemy in the world.” “What a beautiful thought! How inspirational!” said the reporter. “Yep,” added the centenarian, “I’ve outlived every last one of them.”

Unfortunately for the Christian, no matter how long he lives there are enemies that will always be with him. Scripture identifies three such enemies⎜the world, the flesh, and Satan. These enemies present constant challenges to the believer and can make spiritual growth more difficult. However, if we rise to the challenge, the difficulties we face with these enemies can also be a source of growth as we develop endurance and mature in godly character (James 1:2-4).

Experienced combatants tell us that the first rule in battle is to know the enemy. This lesson is designed to give the believer a better understanding of our enemies, thereby increasing our ability to defeat them and decreasing their ability to hinder our spiritual growth. Our three primary enemies, as identified in Scripture, are described below.

The first enemy that the believer must contend with is the world. By world, we do not mean the physical surroundings we inhabit. The most common use of the word “world” in the New Testament is that of an evil kingdom here on earth. It is a kingdom ruled by Satan (Ephesians 2:2) and populated by nonbelievers who are alienated from God and hostile toward Him (Colossians 1:21). When Christ comes back to earth to establish His eternal Kingdom in all its fullness, this temporary evil kingdom will be done away with.

When a person places his trust in Christ as Savior, he passes from death unto life, from the kingdom of darkness into the Kingdom of light. Believers are no longer members of the worldly kingdom, but citizens of the Kingdom of God (Colossians 1:13-14, 21-22). The Apostle Peter reminds us that we are foreigners and aliens here (I Peter 2:11).

Although believers are a part of God’s Kingdom, we must live in this evil world, and we are affected by it. Scripture tells us that this world system is characterized by the lust for physical pleasure, the lust for everything we see, and pride in possessions (I John 2:15-17). Or as author Charles Swindoll puts it in Living Above the Level of Mediocrity, “The world system is committed to at least four major objectives, which I can summarize in four words: fortune, fame, power, pleasure.”

We are surrounded by unbelievers whose lives are driven by these objectives; yet, as citizens of the heavenly Kingdom, we must stand firm and resist the temptation to be swept along by the current. The result is that we are mistreated and persecuted for our values and beliefs, sometimes purposely and sometimes inadvertently. Sometimes this opposition will take the form of ridicule, sometimes of outright hostility. Sometimes we just have to deal with the subtle, lonely feeling that we are out of place here and do not belong. And, of course, there is the ever-present pain of living in a fallen world, characterized by unhealthy relationships, harmful behaviors, and other consequences of sin.

Some believers have misunderstood what our stance should be regarding the earthly kingdom in which we live. They think that the only way to be true to God is to live apart from this world as much as possible. They try to avoid contact or relationships with unbelievers, and they often criticize other believers whom they consider to be compromising with the world. Interestingly, Jesus faced similar criticism from the religious leaders of His day. As children of God and members of His eternal Kingdom, we have a responsibility to be a positive influence in the midst of the people around us. We are not to let the world influence us toward evil, but rather we are to be God’s ambassadors and influence this world for Him.

The second enemy of the Christian is the flesh. Some years ago, the cartoon strip Pogo featured the character of that name surrounded by pollution and destruction. Pogo is seen remarking to his sidekick, “We have met the enemy and he is us.” Indeed, just as we humans have done much to pollute and trash God’s creation, so we have a sin nature that continues to pollute and corrupt God’s new creation in us. The enemy lives within.

All humans are born with a sin nature. This sin nature is more than just wrong thinking or bad habits. It is an inner bent and set of desires that influence us to oppose God and His righteousness. J. Oswald Sanders, a noted Christian author, wrote in his book Enjoying Intimacy with God that the flesh is “the evil principle in man’s nature, the traitor within who is in league with the attackers without. The flesh provides the tinder on which the devil’s temptations can kindle.” James, the brother of Jesus, describes the influence of our flesh when he writes that we sin when we are lead astray by our own lusts (James 1:14).

The unbeliever is controlled by this sin nature. The Christian still has the sin nature residing within, and must battle against it until the sin nature ceases to exist at death. Although the Christian still has to contend with the sin nature, he has become a new creation in Christ and has been given the gift of the Holy Spirit. Through the power of the indwelling Spirit, we can overcome the sin nature at any given moment in time. In fact, it is impossible to yield to the flesh or sin nature at the same time that we are yielded to the Spirit of God, since the two are contrary to one another. “Walk in the Spirit and you will not fulfill the lusts of the flesh,” writes the Apostle Paul in Galatians 5:16. And he affirms confidently in Romans 8:12, “You have no obligation whatsoever to do what your sinful nature urges you to do.” (New Living Translation)

Our third enemy is the devil. Far from being a cartoon character with little horns and a pitchfork, the Devil is a real enemy, a dangerous enemy, and one that seeks to cause us harm. Scripture warns that the Devil goes about looking to catch Christians off guard so he can destroy them. The Devil and the army of evil spirits at his command in the invisible realm hate Christians because we have cast our allegiance with his archenemy. Once a high-ranking angel in God’s Kingdom, the Devil chose to rebel against God. Now he is the embodiment of evil and opposes God and everything He stands for.

In keeping with His perfect purposes, God who is all-powerful is allowing the Devil to have limited authority for a season. The Devil and all his helpers will eventually be rendered powerless, and he will be thrown into a lake of fire where he will be tormented forever. The final chapter in the story has already been written, so the Christian does not need to worry who will win out in the end.

In the meantime, however, the believer must contend with this enemy. He must stay on guard and recognize when the Devil is on the attack. Far from being helpless against the strategies and attacks of the Devil, the believer has the power to resist him. Peter wrote that we should stand firm against the Devil (I Peter 5:8- 9). In fact, James wrote to the early believers, “Resist the devil, and he will flee from you.” (James 4:7) And in his letter to the Christians in Ephesus, the Apostle Paul goes into detail regarding the equipment that we have been given to fight our enemies (Ephesians 6:13-18). He states specifically that this armor and these weapons, such as the belt of truth, the breastplate of righteousness, the shield of faith, and the sword of the Spirit, have been given to us so that we can “take our stand against the devil’s schemes.”

One of the Devil’s favorite tactics is to try to create doubt in the mind of Christians. Satan is known as the father of lies (John 8:44), and he is a master at distorting the truth. This has been his approach from the beginning. His method with Eve was to distort the truth and create doubt in her mind about the goodness of God. He exercises the same tactic with believers today. And, if we listen to the Devil’s lies and allow unfavorable circumstances to sway our opinion, we can find ourselves doubting the goodness or power of God. It is imperative that we immerse ourselves in God’s Word and arm ourselves with His truth.

The words of A Mighty Fortress Is Our God, an old Christian hymn written by the reformer Martin Luther in the sixteenth century, continue to encourage twenty-first century believers as we battle the Devil. Excerpts from the first and third verses read as follows: “For still our ancient foe, does seek to work us woe, his craft and power are great, and armed with cruel hate, on earth is not his equal. And though this world with devils filled, should threaten to undo us, we will not fear for God has willed His truth to triumph through us. The prince of darkness grim, we tremble not for him, his rage we can endure. For lo, his doom is sure. One little word shall fell him.” In these verses we are reminded of the power of the enemy yet, more importantly, of the victory we have through Jesus Christ.

An important part of spiritual growth is learning to overcome our enemies in this life. The believer must be aware of his enemies and make use of the weapons mentioned in Scripture to combat these enemies. As we engage in battle, we rest secure in the promises of God’s Word. In the eighth chapter of Romans, Paul asks rhetorically, “If God be for us, who can be against us?” After listing several things that could potentially defeat us, Paul states emphatically that we are more than conquerors through Christ Jesus (Romans 8:34). He then goes on to affirm that nothing in all creation is able to separate us from the love of God through Christ Jesus our Lord (Romans 8:39).

• Think of an area of your life in which you have ongoing struggles. How might these 3 enemies (world, flesh, Devil) play a part in these struggles?

Write down some of the ways the world, the flesh and the Devil interact with each other against us.

Get this Pocket Principle in Growing Spiritually, part of Cornerstone  from the WDA Store