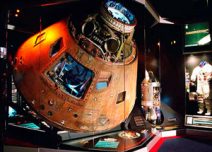 The Apollo Project of the National Aeronautics and Space Administration had been a stunning success. It had accomplished what no one had thought possible: putting the first men on the moon. The American public had become accustomed to hearing of one successful mission after another until everyone assumed it would always be so.

But Apollo 13 was destined to be an exception. One disaster after another plagued this mission until it seemed impossible to bring the astronauts back safely. The technicians in Houston became discouraged to the point of despair. The thought on everyone’s mind was finally stated: “This could be our greatest catastrophe!”

In Apollo 13  (the movie), a man of vision and action, seeing the situation from a different perspective, prophesied, “No, this will be our finest hour!”    Courageous, visionary leadership galvanized a heroic team effort that beat the odds and won the heart of America and the rest of the world.

Western Christianity, once a bastion of spiritual strength, faces a growing crisis as we witness the breakdown of the structures that have historically fostered morality and character. Our families have fragmented amid selfish individualism fueled by a consumer-oriented society. Our schools have exchanged biblical values for secular humanistic philosophies and eastern mysticism.  Government seems confused, wondering if there is a foundation of absolutes upon which to establish law and policy, or if shifting public opinion should shape public life.  And if that isn’t enough, the media seems bent on pulling down what remains of a biblical worldview in Western Civilization. Are we living, as Dickens observed in A Tale of Two Cities, in the “worst of times?”   The nightly news seems to be evidence enough.

But underlying the crisis in society is a crisis of character.

Though it may seem that all of these problems emerged overnight, this character crisis has actually been developing for some time and can be linked to a blindspot in Christianity.  For many years, the church has failed to produce men and women of character in significant numbers.  Without leaders of character, societies ultimately decline, and eventually fail.  Many of our churches have abandoned a biblical worldview altogether, and others have neglected spiritual nurture for programs in which success is determined primarily by numbers, effectively sacrificing maturity for members.  Ironically, this has produced a “revolving-door syndrome” in some communities, where people move from church to church, disenchanted with their old congregation,  searching for a place where they can find authentic Christianity.

Ironically, we live in a culture that is filled with spiritual needs but growing increasingly hostile toward evangelical Christianity.  Christianity in the West is progressively ceasing to be “salt and light” to the world, and is in danger of being “trampled underfoot by men.” But there is good news.

God is not unaware, or indifferent.  He is sovereign over the nations (Psalm 2) and Lord of His Church, and He will defend the honor of His Name and renew His people.  Throughout history, when it seemed as if the people of God were surely defeated, the troubles they faced often became the catalyst for renewal and victory.  Sometimes it requires hardship and defeat to refocus our perspective.  Romans 8: 28-29 affirms that “God causes all things to work together for good to those who love Him, who have been called according to His purpose.  For those God foreknew, He also predestined to be conformed to the likeness of His Son.”

But helping people become Christlike is not easy.  There are obstacles.  (It’s easy to see why Satan hates this idea.)  The way is difficult, at times hard-to-understand, and it requires humility and faith.  But the outcome is worth it, both for now and for eternity.  But we must be honest.  Current approaches for helping Christians grow to maturity are not working adequately.

We need a new approach, a new perspective.  Any new perspective requires a new way of thinking.  This in itself is challenging for some.  And it will require biblical balance.  The growth process involves both mystery and method.   God is in charge, but He expects us to do our part.  He is building a people for His own pleasure who are able to rise above the world, take on the characteristics of God Himself, and live significant lives that impact all eternity.  But like the courageous leader of The Apollo 13 Project, we need a proper perspective of His plans and strategies to fully appreciate the process He has designed to accomplish His objectives.